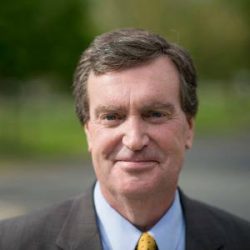 Doug Duncan (’15) has been a leader and community builder in the Greater Washington Region for over thirty-five years. He is a proven executive-level manager, with demonstrated leadership in developing an organizational vision and putting that vision into action. An experienced public communicator and crisis manager, Mr. Duncan has a record of success in building partnerships and collaborating with diverse and varied groups of people to identify and reach a common goal.

Mr. Duncan today serves as President & CEO of Leadership Greater Washington, where he brings together regional leaders and regional challenges to foster positive community impact. LGW is a thirty year organization with over eighteen hundred members who have gone through its Signature Program and who are among the top decision makers in the region.

Mr. Duncan is best known for having served three terms as Montgomery County Executive, the top elected official in Maryland’s largest jurisdiction. The Washington Post has called him the best County Executive in Montgomery County history. In his highly successful 12 years in office, he developed, coordinated and implemented a wide array of initiatives on the local, regional and state levels, in partnership with multiple constituencies including residents, civic groups, unions, non-profits, the business and education communities, and other elected officials.

He led Montgomery County through its transformation from a suburban bedroom community into a thriving urban center recognized for visionary land planning, its global technology industry, and vast open spaces and parks. The results of Doug Duncan’s landmark initiatives have been hailed nationally as models for other communities across the country. He successfully revitalized downtown Silver Spring, now a national model for urban redevelopment. He led the effort to fund and construct the Music Center at Strathmore, rated as one of the best concert halls in the country. And during an extraordinarily dangerous time in our region’s history, Mr. Duncan, along with Police Chief Charles Moose, helped lead this community through the DC area sniper shootings, where he earned the nickname of Chaplain for the region.

Among numerous awards, Mr. Duncan has been named to the Washington Business Journal Power 100 and as a Washingtonian of the Year by Washingtonian Magazine.

There are no articles available.