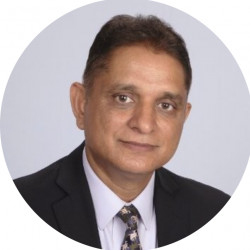 Anurag Kumar has over 35 years of executive experience in the outsourcing services and technology industries, including more than 21 years as president or CEO. He has founded 5 companies and led 2 rapid turnarounds.

Currently, Anurag is President of Improving Nearshore, Before that he co-founded iTexico in 2010, a leader in nearshore software services with operations in Austin, the Bay Area, Guadalajara, and Aguascalientes. Before selling it to Improving in 2020, he grew iTexico into a multimillion-dollar company with over 300 employees and 250+ clients in the US, Canada, Mexico, and the UK. iTexico earned the recognition of Inc. Magazine and Austin Business Journal as one of the fastest-growing companies in the US for five of those years (2015–2017, 2019, and 2020).

In 2010, while Anurag was launching iTexico, he served concurrently as interim CEO for Shergroup India, the Indian arm of the UK’s leading collection enforcement company. There he led a successful turnaround in just 6 months. Prior, from 2008 to 2013, Anurag held a variety of consulting roles and board positions, including CEO Chair of Vistage, a global business coaching and advising firm.
From 2001 to 2007, Anurag was Founder and President of ConnectionE, LLC, a wireless solutions provider. Over the course of his tenure, he grew the company to 12 staff and over $1M in annual revenue with no debt or outside capital. Anurag sold ConnectionE in 2007. Anurag was a director / senior manager at Dell from 2007 to 2008. There he led teams of 10+ in developing and releasing next-generation remote management IT services. Prior, from 2006 to 2007, Anurag held the role of interim CEO for Cressanda Solutions, a 150-employee IT services company. Cressanda was suffering from a negative cashflow when he took the position, a situation that he turned around in only 9 months by cutting expenses by 30% while increasing sales by 40%.

From 1999 to 2001, Anurag was Founder and CEO of Mediaprise. This venture-backed company developed enterprise marketing information and brand management software for Fortune 1000 companies and reached a value of $24 million by July 2000. Anurag personally raised $14 million for the company and served as liaison to large accounts including Whirlpool, Sears and Nokia. Prior, from 1990 to 1999, he worked at IBM in roles up to the director level, simultaneously earning his MBA and teaching at both undergraduate and graduate levels at Wayne State University and Walsh College.

From 1988 to 1990, Anurag was CEO and Co-founder of UniComp, which he launched to leverage the growing Unix market. Before that, he built his first company, Management System Consultants, in 1985, when he was only 24 years old. Anurag grew this software development and project management services business to over $1M in revenue before selling his share in 1988. He began his career as a software development analyst in 1982.

Anurag has been married to Vandana, a former IBM executive and fellow distinguished alum of Wayne State, for over 34 years. They have two adult children.

There are no articles available.